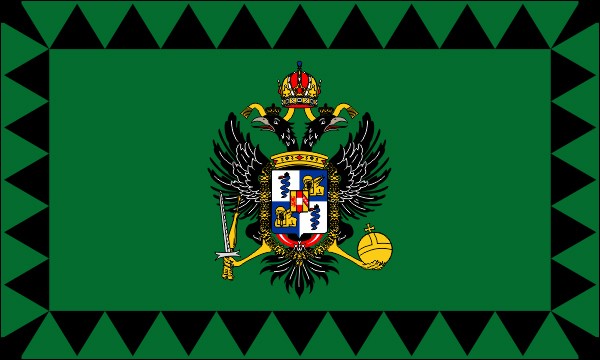 This flag is shown in various sources for the Kingdom of Lombardy-Venetia (also on a yellow bunting instead of green), but it is considered unsafe. The flag of the Kingdom of Lombardy-Venetia was not handed down with certainty. A black and golden flag was probably used, just as it was used as the national flag by the Austrian Empire. As a further variant, the red-white-red Austrian naval and war flag is given as the state flag. The Kingdom of Lombardy-Venetia was founded in 1815 at the Congress of Vienna. King was in personal union the Emperor of Austria. After the Peace of Villafranca (1859) Austria lost Lombardy to France, which exchanged the country with Sardinia-Piedmont for Nice. With the Peace of Vienna (1866) Venetia (Veneto) and the Mantua area came to Italy.

Source for image and text, and more information about the country and flag, also in English, at: www.flaggenlexikon.de and there under Kingdom of Lombardy-Venetia