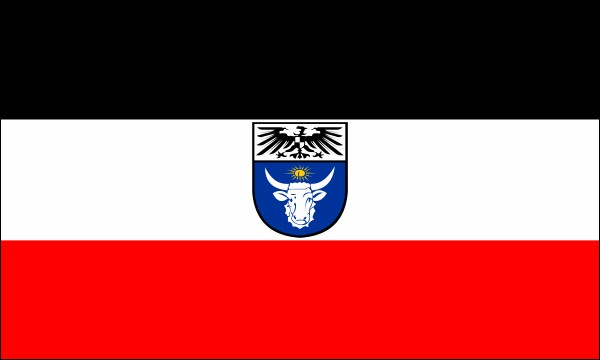 The German colonies, and thus German South West Africa, were subject - with the exception of Kiautschou (Kiaochow) - to the Imperial Colonial Office. Correspondingly, authorities used its seals, flags and the imperial coat of arms. From 1913 onwards, the consideration was given to create national emblems for the colonies. The first drafts were available in 1914, the flags only differed in the depiction of the coat of arms in the middle. The project was no longer implemented because of the outbreak of World War I and the loss of the colonies. The intended appearance of the coats of arms and flags could only be reconstructed using fragments in the 20s and 30s of the 20th century. Most of the reconstructions refer to an article in the newspaper "Afrika-Nachrichten" from 1933 and the resulting reconstructions by the Dutch vexillologist Mark Sensen from February 1998, which are considered on these pages.

Source for image and text, and more information about the country and flag, also in English, at: www.flaggenlexikon.de and there under German South West Africa