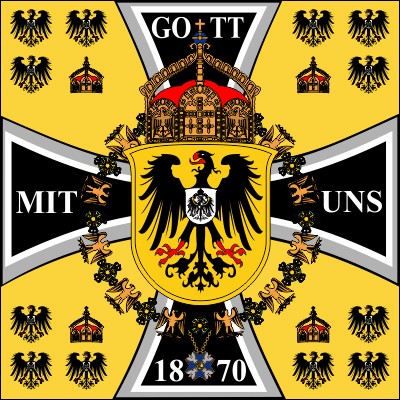 Wilhelm II. of Hohenzollern was Emperor of the German Empire and King of Prussia. The flag (standard) of the Emperor of the German Empire is similar to the flag of the King of Prussia. However, the basic color changed from crimson to gold. The iron cross shows the saying "God with us" and the year "1870". This motto has been the Hohenzollern motto since 1701. The year is probably an allusion to the decisive battle of Sedan. The Empress and the Crown Prince each had their own standards.

Source for image and text, and more information about the country and flag, also in English, at: www.flaggenlexikon.de and there under German Empire